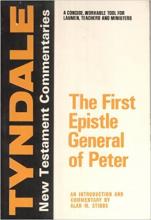 IVP (Inter-Varsity Press) has produced two series of short and readable commentaries on each book of the Bible. First came the "Tyndale" commentaries, then later they produced the "Bible Speaks Today" series. Both are a similar size (typically 150 pages or so). Both are designed to be readable by any Christian wanting to understand the Bible better; no particular level of theological education is assumed. Both are at about the same price point (about £10 new at the moment). The Tyndales tend to be more technical, working through passages verse by verse. The BST tend to be more flowing, covering each section of the biblical book in a style that is a hybrid between commentary and published sermon.

We're preaching through 1 Peter at church at the moment, and I have two Tyndale commentaries on 1 Peter on my shelf. The current one is by Wayne Grudem, published in 2009, with a revised edition due out in December 2022.

But the first generation Tyndale commentary was by Andrew Finlay Walls and Alan Stibbs, from 1959. Walls wrote the introduction; Stibbs wrote the commentary.

I've found, consistently, it is absolutely excellent. As I said above, Tyndale commentaries tend to work through verse by verse, rather than giving you a sense of "the message of" each section. (The individual volumes of the Bible Speaks Today series are all entitled "The Message of ..." {1 Peter, etc.}.) Stibbs is different. He goes through each verse at a time, in a style common to other early Tyndale volumes. But at the beginning of the commentary section on each section of 1 Peter, there are a few paragraphs to outline the message of the section as a whole.

In my experience, it is rare to have a Tyndale commentary gather together the flow of thought of the book as a whole. They tend to be strong on verse-by-verse comment, but lacking on the flow of thought. Stibbs does this, but also does it very well. Having studied a particular section of 1 Peter for myself, I find that I then turn to his commentary and find that he summarises things very well indeed.

You can only buy this second hand, of course. This is one problem with recommissioning volumes in a series of commentaries; the new volume may be very good, but it means that the publishers stop printing what were sometimes very good commentaries indeed. This is one of those, and if you find a second hand copy for a sensible price then buy it.

“Trial and suffering, endured because of our Christian faith, should be regarded not with surprise or shame, but with rejoicing and as a means of glorifying God. For they are no strange mischance, interfering with the fulfilment of God’s purpose. Rather they are the divinely-appointed way of testing and purifying faith. God can and does use them to further His own ends. Also, they are to be viewed as a sharing in Christ’s sufferings, an experience which makes us, or proves that we are, peculiarly one with Him. Such a privilege is in itself cause for rejoicing, the more so because it holds sure promise of an overwhelmingly joyful participation in Christ’s coming manifested glory. And those who now share Christ’s reproach at the hands of men, share also in the crowning blessing granted to God’s true temple, that is, participation in that manifested glory of the divine Presence which is made ours by the indwelling Spirit.

“The distinctive experience, which is thus to be reckoned and proved to be a blessing, is to be reproached for the name of Christ, as a Christian. We must make sure, therefore, that any suffering which we experience is genuinely Christian and undeserved. For there is no joy or glory in suffering as an evil-doer, or in bringing trouble upon oneself by unwarranted interference in other people’s lives.

“These sufferings of Christians are the initial stages of God’s judgement of sinful men. They are purificatory with a view to salvation, though they involve temporary earthly pain and loss. The final stages of God’s judgement will bring only condemnation and eternal loss on the ungodly who obey not the gospel of God. So, those who know that their sufferings are according to God’s will, and not a result of their own evil-doing, should keep up their well-doing, trusting that God, even through the suffering, will deal with them faithfully for their eternal good, and bring them in the end with Christ to glory.” (Pages 157-8)

The old tyndale commentaries are great!!

You probably don't remember me James (our parents are friends and we met a few times as children) just wanted to assure you of my prayers in this latest phase of life.

Of course I remember you Mark - very happy memories of a holiday in Dorest when I must only have been about 10 or 11 years old. I really appreciate you looking me up so many years later, and for your prayers for a friend you'd long lost touch with. Every blessing to you, whatever you're up to these days.

END_OF_DOCUMENT_TOKEN_TO_BE_REPLACED

One book, at random…
The Message of 2 Peter and Jude: The Promise of His Coming (Bible Speaks Today) (Hardcover)
by:
Richard C. Lucas