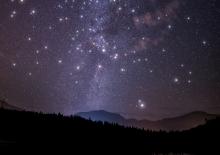 Last Sunday, at our all-age service, we looked at the visit of the Magi, as recorded in Matthew 2:1-11.

8 years ago, I quoted from R T France, as he observed that the role of the star changed when the Magi left Jerusalem. Only at that point was it recorded that they followed the star, and their joy can only be explained if the star pinpointed the exact house.

Yesterday, as we looked at this, we noticed an additional detail that points the same way.

The Greek word here could indicate that they saw the star as it rose from the horizon, or that they saw it in the part of the sky where the son rises, namely the east.

Personally, I think the case is strong that the east is meant, because the word is the same as in verse 1.

If this means that they saw the star in the eastern part of the sky, then we need to combine it with verse 1. Relative to Judea, the Magi were "from the east" (traditionally ancient Persia). Relative to the Magi, the star was "in the east".

So far from them following the star from Persia (or wherever) to Jerusalem, they in fact turned their backs on the star and walked west to Judea.

This all suggests that the star told them a king was born (because they were astrologers), but that their knowledge of the Jewish Scriptures led them to wait for a king of the Jews. So they set off, immediately, for Judea, and went by their own instinct to the royal capital. Their knowledge of the Scriptures must have been rudimentary, because they then needed to be pointed to Micah 5 to learn of Bethlehem. Lastly, they needed the star to act as satellite navigation, to direct them to the precise house.