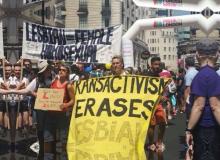 The BBC reports a fascinating development at this year's Pride march in London, which took place last Saturday (8th July 2018).

Here's the summary from the beginning of that BBC report:

Members of lesbian and feminist group Get The L Out demanded to march behind the rainbow flag, which marks the start of the event, organisers said.

The group argues the trans movement is attacking lesbian rights and said it protested to protect those rights.

First of all, let's get our sources clear.

Get the L Out

Who are Get the L Out?

There's a newly created Wordpress blog to announce their existence. Assuming that's genuinely by them, here's what they say:

Get the L Out is a group of lesbian and feminist individuals and organisations, opposing the increasingly anti-lesbian and misogynistic LGBT movement and the erasure of lesbians

We believe that lesbian rights are under attack by the trans movement and we encourage lesbians everywhere to leave the LGBT and form their own independent movement, as well as to be vocal and take action against the proposed changes to the GRA.

Get the L Out believes trans politics (with uncritical support from the LGBT movement) does the following:

Promotes the social transition of lesbians, encouraging them to present as straight men thus favouring the pretence of heterosexuality over lesbianism – this is nothing more than a form of conversion therapy.

Promotes the rights of heterosexual males who “identify” as women and lesbians (despite most of them still retaining their male genitals) over the rights of lesbians to choose their sexual partners.

The organisers of Pride in London (which, as I've pointed out before, is not to be confused with London Pride) have responded:

The protest group showed a level of bigotry, ignorance and hate that is unacceptable.

We reject what this group stands for. They do not share our values, which are about inclusion and respect and support for the most marginalised parts of our community.

We might start to notice the dilemma here. The organisers of Pride reject this group. Why? They aren't inclusive enough. Yet one could say that Pride is the group that fails to be inclusive, by not making space for them.

Perhaps it's not possible for all to be inclusive, at the same time and in the same sense.

I think this one is worth drawing out further.

This may not be exactly the protestors point, but there's a problem in logic here.

The string of letters has got progressively (see what I did there?) longer for the past 20 years. What started out as Gay became "Gay and Lesbian", became LGB, became LGBT, became LGBTI, became … (I lose track).

There's a wish to see these various groups, each representing a different sexual orientation, as having common cause. What unites these groups is that they fall outside the simple pattern of one man and one woman in exclusive partnership.

What's just happened is that one group of "L" have said that the presence of "T" in "LGBT" makes it impossible for them to be truly "L". So "L" and "T" are logically inconsistent. The same logic would work for "G" and "T". So you can have LGB, or BT, but you cannot have BLT: you can't have LG and T in the same string of letters.

Why not? Doubtless this over-simplifies, but here's my understanding:

The "T", standing for "trans-sexual", is about people being free to identify with a gender other than the anatomical sex they were born with, and other than their chromosomes would point them to.

But the "T" is not about those cases. This is about people whose genes and physical bodies are unambiguously male or female, but wish to choose a gender other than the one they were born with. Some choose to have their bodies adapted to suit this belief; others remain in their birth bodies but identify differently.

"L" is for women who wish to relate sexually to other women. The question for them is whether you are attracted to, and form sexual partnerships with, people of the same sex or people of the opposite sex.

Now, here's the problem: Once you say that "the same sex" and "the opposite sex" has no basis in reality, and that one's gender is a personal choice that may be changed, then that question no longer makes any sense. There is no such thing as "someone who is the same sex as me", because that means little more than "someone who chooses to identify with the same sex as I choose".

So the acceptance of "trans" rights makes lesbian rights impossible.

What did the Pride organisers do with this point? They apologised that the lesbians who saw this inconsistency were allowed to have a visible presence at their event.

So they took the decision that rational coherence doesn't matter. Feelings trump reason. Philosophically speaking, they are true romantics.

What all of this does is explode a myth about the LGBT cause. It is not a coherent worldview. The Western World is moving to embrace this wholesale, but it doesn't stand up to scrutiny as a rationally coherent way to view the world. To be sure, for many of those who see the world this way, this does not bother them. I've already made that point. It may not bother them that it's internally inconsistent, but the fact this is so needs acknowledging.

Jesus of Nazareth said: "I am the way, the truth and the life. No-one comes to the Father, except by me."

He is the one who is both the truth and the life. In him is "life in all its fulness". He fulfils the yearning of every romantic to be truly and fully alive. He also is "the truth"; he embodies it. Whilst acknowledging that "the truth" is quite specific in John's gospel, and is all tied up with Jesus' relationship to his Father, it is also the case that he alone offers a way of understanding the world that is consistent at every point. We may not always see his consistency, but that is always because of the way our minds fail to see him fully, and not because he is inconsistent in and of himself.

What makes sense / what works / what satisfies. There is no need to choose; you can have all three.

No other worldview satisfies fully and is perfectly consistent. So we proclaim him, and call every person of every creed, colour and sexual orientation to come to him and be remade by his hands into the people he created us to be.

END_OF_DOCUMENT_TOKEN_TO_BE_REPLACED

One book, at random…
The Epistle to the Romans (Paperback)
by:
H. C. G. Moule