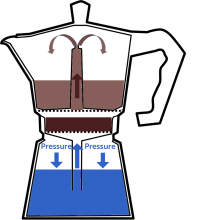 The Moka Pot is a traditional Italian tool for preparing coffee. They're nick-named (unhelpfully) "stove-top espresso makers". They're sometimes confused for 1970s percolators, but they're very different because the water only passes once through the coffee. Unfortunately, many people have them but never use them, because they have the view that they prepare coffee with an unpleasantly strong, bitter taste.

I've increasingly found I'm using mine as a method of choice. I don't normally like dark roasted beans, and struggle to brew anything drinkable, but I've found that (good quality) dark-roasted beans can yield a creamy flavour from the moka pot. For a lighter, brighter roast, moka pot can make an absolutely delicious brew that is very clean. It's all about how you use it.

I thought I'd write up the lessons I've learnt, and maybe a few readers here will dust off and polish theirs from the back of the cupboard.

The most well-known brand is Bialetti. They come in a range of different sizes (remember these are coffee cup sizes - so "3 cup" = one modest sized mug). You probably don't want the very cute 1-cup size! 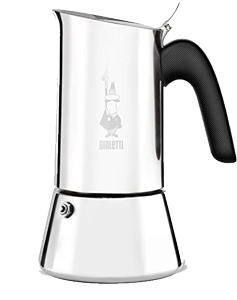 You can buy in Aluminium (which tend to be octagonal) or Stainless Steel (which tend to be circular). Personally, I prefer the stainless, because it's easier to keep clean (see below on why that's important), and because coffee is potentially acidic enough to slightly erode the protective oxide layer on aluminium which could lead to metal cationic content dissolving into the coffee in small amounts. Stainless will also work on an induction hob.

Just a tip: I've found that the larger the size of the pot, the harder it is to work with. I'll explain why at the end of this post. 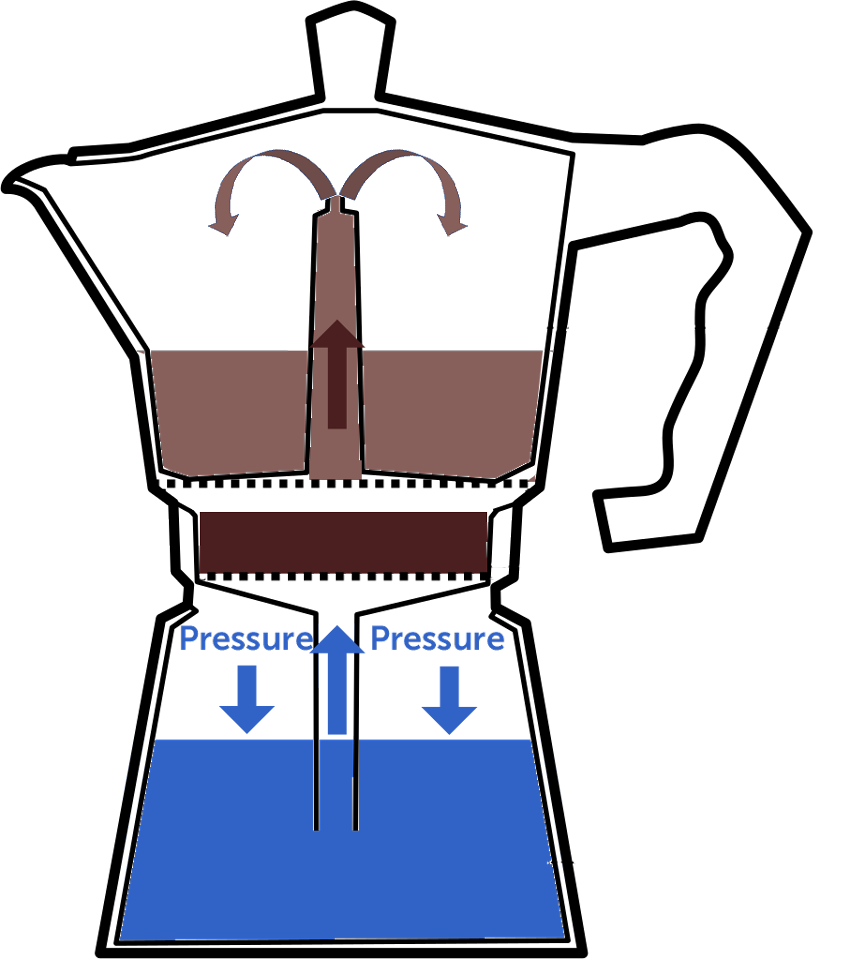 As the water heats, it evaporates, forming a layer of wet steam above the level of the water in the bottom chamber. As more water evaporates, it increases the pressure in the air above the water. Gradually, the pressure increases enough to start to push the water down, which then forces the water up through the spout and into the funnel. As long as the water keeps heating and evaporating, that pressure will keep pushing the water through the ground coffee and up the spout into the top chamber. Once that starts to happen, you can also get a slight syphon effect, so that the water is being pulled as well as pushed.

You don't want to brew with boiling water. You want water just below the boil. The evaporation becomes sufficient for the pot to do its stuff before the water gets to boiling point, so you don't need a boil for it to work. Making sure the water in the bottom doesn't come to the boil affects a few of the variables as to how you brew, as comes out in the tips below. There's a race on. You want to get the water brewed through the coffee and safely in the upper chamber as a tasty brew, before the water in the bottom starts to boil. How that affects the way you use the pot will become clear in a moment.

Here are lots of tips on getting the best out of your moka pot, including explaining where I went wrong for years.

Back to my observation earlier that smaller pots are easier to work with. I've found that a 6 cup moka pot is much less forgiving at getting the variables right to achieve a full brew before the water boils. 3 or 4 cup moka pots are much easier to get right. Anything above 6 cups, and I almost can't do it. With a 9 cup moka pot, I typically manage to get half the water through and then I have to stop.

That must be to do with the volume of water that needs to be brewed. It takes longer to get that amount of water through the ground coffee, so you have to keep the water hot enough yet below boiling for longer. I can't understand why that's so hard, because the larger volume of water will also heat (climb in temperature) more slowly for the same amount of heat applied underneath. But it seems to be.

Over to you. Any thoughts on why brewing with the larger sized pots is so hard? Any methods you've found to get this to work? Or is it just me? Any other tips you'd recommend? Comment below.