What we fear to be unconquerable has been conquered 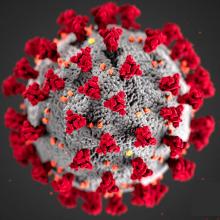 Our church produces a quarterly magazine that goes, free, to every household in our parish. It's called The Well.

As vicar, I get to write a letter near the front of each issue, in which I seek briefly to bring a Christian perspective to bear on some contemporary issue or other.

The latest issue came out in March, although sadly not every household was able to receive a copy before the lockdown meant our distributors had to stop. I had to write my column at the end of February (24th, as it happened), because that was the copy deadine. The news about coronavirus was just beginning to spread as something that would affect us in the West. I knew I was writing about something that was beginning to cause much fear and concern, but I did not know where we would be when the issue was printed. It could all have blown over, or it could continue to be a matter for grave concern. I wrote my "vicar's letter" very much hoping for the former, but well aware that the latter could be the case.

Aside from the fact that an invitation to join us on Easter Sunday proved to be redundant (at least in person - by then, all our services were online-only on the church YouTube channel), I think what I wrote remains relevant. Here's what I wrote:

As I write, we’re in the middle of panic about the spread of a particular coronavirus, COVID-19, which started in Wuhan, China, and has now spread around the world. Chinese factories are suspending manufacture of items we take for granted in the West; financial markets have had several days with dramatic falls; British travellers abroad are being repatriated and quarantined.

Modern medicine is amazing. Antibiotics, blood transfusion and routine immunisations are just three developments that mean the infant mortality rate is far lower than in centuries past, and we no longer routinely die from many illnesses. However, this coronavirus has killed 2,500 people worldwide so far, and appears unchecked. The resulting sense of fear and panic is understandable. Here’s an illness that our current medical advances are not able to control. Our regular feeling that we are invincible has been replaced with a feeling of great fragility.

I sincerely hope that, by the time you read this, all this will sound dated. Hopefully there will be a vaccine to cure COVID-19, another to immunise against it, infection rates will be down, and this will be well on the way to being forgotten.

It’s good to pause and pay attention when something cuts through our sense that we can conquer anything. Infant mortality may have fallen since the 19th century, but the human mortality rate remains at 100%. I have no wish to be morbid; smallpox may no longer kill a single human being, but something else will eventually. Death is the universal human problem that we cannot cure. Our fear of coronavirus comes from the fact that we don’t like to be reminded of our powerlessness.

This is why Easter is such amazingly good news. On April 12th this year, we will celebrate the fact that Jesus of Nazareth is a real human being who went through death and came out the other side. He rose from the dead, and was seen alive by hundreds of people on at least 10 separate occasions. The 4 gospels were written while those eyewitnesses were still around. He’s still alive today. He is invincible; he has conquered death and so he can conquer anything. He invites us to trust him with our own life, and with our own death.

The Christian faith is not just a philosophy, a set of rules to live by, some ideals to prop up those who can’t get by on their own. It is the good news that our deepest fear, the problem we cannot conquer ourselves, has been fully dealt with.

With every blessing, and happy Easter! Your friend and vicar,