My sabbatical study project concerns a specific aspect of Trinitarian theology. (See my earlier post outlining what I planned to study).

Before reading books on this specific topic, I've been reading some more general works on the Trinity. My thinking is very rusty, and I need to enter the world of Trinitarian thought again at greater detail.

In so doing, I've found I've come to understand some things that I have always struggled with. One of those is what people mean when they say that the Spirit can be thought of as the love between the Father and the Son. I've heard this said often, but beyond people saying that it's an idea tracing back to Augustine, I've never heard it explained. (This may well be because I wasn't listening, or wasn't understanding, and not because nobody was trying.)

Well, reading Gilles Emery's introductory book, The Trinity, I've finally seen what this is all about. I think. 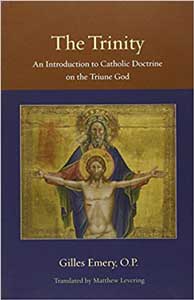 How can the Holy Spirit be a divine person?

The early church had resolved how to articulate that God the Son was divine. The problem there had been how God can be one and unchanging, and yet have a Son who is also divine. The answer turned on the distinction between being "begotten" and being "created". As we sing every Christmas, "very God of very God, begotten not created", quoting the Nicene Creed: "begotten, not made". When it comes to God the Son, it has been established that he is divine even though he is not God the Father, because he's the only begotten Son of the Father.

But then what do we do with the Holy Spirit? He is neither the Father nor begotten. So the same problem surfaces all over again: Given the Spirit is not the same person as the Father, how can he be divine? At one level, the thinking had already been done: Once you've established that the one God can be both Father and Son, the same arguments can be used to articulate how the Holy Spirit is also God. But at another level, the work has not been done, because the thinking does not transfer. God the Son is God because he's the Begotten One; God the Holy Spirit is not "begotten", so another way of articulating his divinity will be needed.

The answer is fairly simple, until you try to understand it.

But what does this mean? What does it mean for the Spirit to "proceed" from the Father, as distinct from what we mean when we say the Son is begotten of the Father? I'll quote Emery:

"When one affirms that the Holy Spirit 'proceeds' in a way that is really distinguished from the generation of the Son, one expresses the true faith, but this remains profoundly obscure. How can we show the distinction between the 'procession' of the Holy Spirit and the generation of the Son, which is likewise immaterial and divine? This question, explains St Augustine, is 'extremely difficult'." (Page 137)

The answer comes in recalling that God the Son is called the "Word". As Emery explained before this section on the Holy Spirit, to call him "The Word" perfectly encapsulates his relation to the Father in so many ways:

Now, says Augustine, the human mind conceives a word. When you speak a word, it is like giving birth to it. The word remains in your own thought, and yet acquires a life of its own once it has been spoken, and it perfectly represents what is in your own mind.

Might the Holy Spirit, in a similar way, be analogous to the love someone has for an object.

"Now love, which is related to the will, is not begotten. The characteristic of the will and of love is not to be produced like an 'offspring' from a 'parent,' but rather is to unite the begetter and the begotten. The Holy Spirit is not begotten, but proceeds in the manner of love. The likeness of love — however limited this likeness might be — thus enables one to show that the procession of the Holy Spirit is not confused with the generation of the Son." (Page 137)

A Match for the Economy

It's important to note that this idea of the Spirit as the love of God has not been plucked out of thin air. Instead, it matches what we see of God in the economy (how we see God at work in his plan to save us).

The classic verse is Romans 5:5 (quoted by Emery on pages 138-9): "And hope does not put us to shame, because God’s love has been poured out into our hearts through the Holy Spirit, who has been given to us."

Here's a lengthy quotation from Augustine, On the Trinity 15.19.37, translated by Edmund Hill, with the translation slightly modified by Emery:

"Since there is nothing greater than charity among God's gifts, and since there is no greater gift of God's than the Holy Spirit, what must we conclude but that he is this charity, which is called both God and from God? And if the charity by which the Father loves the Son and the Son loves the Father ineffably shows forth the communion of them both, what is more suitable than that he who is the common Spirit of them both should be distinctively called charity? This, surely, is the sounder way for us to believe and understand the matter: that the Holy Spirit is not alone charity in that Trinity, but that there is a good reason for properly calling him charity." (Page 139)

Two further remarks need to be made before finishing.

Why Father and Son?

The other obvious question is why we would call the Holy Spirit the love of God, when surely all three persons of the God show love.

But then we can be a little more precise. When God the Father shows love for his own Son, the love he shows is personal, and (remembering we use analogical language) God the Holy Spirit is that love. Far from denying that the Father and the Son also show love, we're actually affirming that they do by saying that the Spirit is that love. We're also not denying that God the Father and God the Son are love. To be divine is to be love. But we're just saying that, of all the three persons, the Spirit is the one who most naturally identifies with that attribute of love.

I'll return to this last point when I talk about appropriation in another post.

END_OF_DOCUMENT_TOKEN_TO_BE_REPLACED

One book, at random…
The Message of Ephesians: God's New Society: With Study Guide (The Bible Speaks Today) (Paperback)
by:
John R.W. Stott