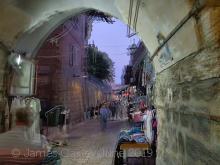 Arrived Tel Aviv airport, and travelled by coach to Jerusalem. Initially, we drove through the flat coastal Plain of Sharon, before climbing up into the hills wherein lies Jerusalem. Jerusalem is 754m above sea level.

Checked in to the Rivoli Hotel, a wonderfully friendly family-owned hotel where Oak Hall has stayed for many years. A welcome drink in the lounge, time to unpack and shower, and a delicious buffet dinner.

It was good to pop out after dinner to visit the old city. We'd have much more time to explore over the coming days, but it was good to see that we really had arrived. It was sensory overload - sounds, sights, smells. The old walled city is a busy, bustling place. 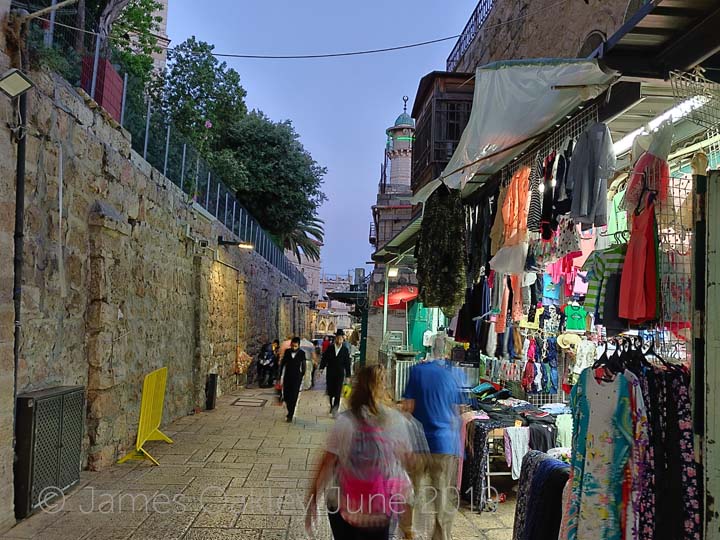 There seemed to be three kinds of shops. Some sold clothing (like the photo above). Some sold spices and other local foods. Then, for some reason, other shops sold huge quantities of Haribo-style sweets.

We made our way to the Western Wall of the temple mount. This took us out of the Muslim Quarter and into the Jewish quarter, and you pass a security checkpoint as you do. (Walk through a metal detector having opened your bag for inspection and placed all metal objects to the side). It's OK (in case you were wondering: Walking through the metal detector does not constitute "work").

Sunset is always a busy time, but this was a particularly busy evening, with many Jews in Jerusalem for the week following Shavuot (our Pentecost).

The Western Wall was a noisy place. Some individuals muttered their way through psalms almost silently. Others were in small groups, with one individual leading the chanting. To our right was a large group of student-aged Jews, who were singing noisily whilst dancing in a large circle. There were some small rooms to the left of the wall, in a little enclave, including a library where visitors could borrow copies of the psalms and other books free of charge.

The site of Solomon's and Zerubbabel / Herod's temples is the Temple Mount, now part of the Muslim quarter, and home to two mosques. Jews cannot visit there, or more exactly they cannot pray. The Western Wall is the closest they can get to the site of the ancient Holy of Holies, which is why they come here to pray. (Solomon's temple was build at the western end of the Temple Mount, and the Holy of Holies was at the west of the temple. You entered the temple from the east, because Adam and Eve left the Garden of Eden to travel east, and the temple symbolises re-entry to the Garden).

It wasn't appropriate to take many photographs in a place of such devout prayer. I took just one. It's also immensely sad that they pray for the restoration of the temple and the coming of the Messiah. We know that Jesus is the Messiah who fulfils all the ancient temple symbolised that, but they do not know that what they pray for is already here.

As we returned to the hotel, it was dark. Security is high in Jerusalem. There are sentry stations for the army and (armed) police everywhere in the old and new city.

Our hotel is nearest to the Herod Gate. We entered through the Damascus Gate (the start of the ancient road to Damascus, where Saul would have left the city with orders to arrest Christians there), because it's less difficult to get lost from there - the streets are straighter! Here's the Herod Gate, lit up at night.