Day 7 afternoon was more exploration around the northern shores of Galilee.

Sermon on the Mount

First up was the traditional site where Jesus delivered the Sermon on the Mount, the Mount of Beatitudes. We were dropped by a monastery at the top of the hill, and walked our way down to the lake shore, stopping half way down to read Matthew 5-7.

At the bottom of the Mount you can walk down to the lakeshore at Tabgha, the traditional site of two of Jesus' miracles.

One of the miracles supposed to have happened there is the feeding of the 5000. The lakeside location may evoke the miracle, but Luke 9:10 places this at Bethsaida, on the other side of the lake.

However there is no reason not to believe the tradition that this is the site of the miraculous catch of fish and the reinstatement of Peter recorded in John 21.

I mention Bethsaida, there was time to visit as it happened, just squeezing in a visit before the National Park site shut for last admissions.

It's in the hills above the lake (a little like Korazin is), east of where the Jordan flows into the north of Lake Galilee (so in the area today known as the Golan Heights).

There you can find a house where excavations have revealed it likely to have been the home of fishermen: 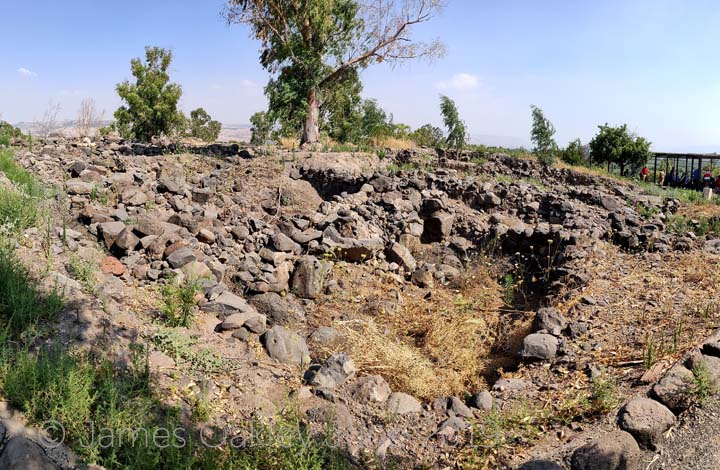 Bethsaida was, after all, the home of Philip, Simon Peter and Andrew (John 1:44). This was also where the blind man was healed in two stages as recorded in Mark 8:22-26.

Cities built upon cities. Again. Bethsaida is also the site of the ancient city of Geshur, and excavations from that period have revealed other things.

For example, we're told repeatedly in Samuel and Kings that the Israelites sacrificed at the high places. One such has been found at Geshur; notice the carving resembling a bull:

Ancient Geshur also had very clear examples of a city gate from this period. The wall was formed into the shape of two capital letter "E"s facing each other: E Ǝ. Everyone entering or leaving the city had to pass through this entrance area. The courtyards thus created formed a public space where deals could be transacted, wisdom and justice dispensed and so on. As we sat there, we thought of Ruth 4:1-12 and Job 29:7-25.

As we headed back to our hotel south along the eastern shore of Lake Galilee, we paused at what may have been the spot where Jesus drove a legion of demons into a herd of some 2000 pigs (Mark 5:1-20). Yet again: Here is a spot that looks right, but may or may not be the exact location! We do know we're after a location along the eastern shore where there is a cliff above the water, and this is such a spot.

The location is that of the Nukeib Lookout, a Syrian lookout assualted by the Israeli army in 1962. In fact, the area is still mined; the road itself passes through a narrow corridor that is fully cleared, but you could not miss the warning signs telling you not to stray from the road and a 50-100 yard verge either side:

Is this the exact spot where the Gerasene demoniac was healed? It's certainly plausible. In fact, just one mile up the road at Kursi, there is a National Park site where some archaeological remains were discovered in the 1960s during the construction of a road. There is certainly evidence of a very early Jewish settlement here (from about the 4th century), and of a longstanding tradition of Christians remembering this miracle of Jesus.

END_OF_DOCUMENT_TOKEN_TO_BE_REPLACED

One book, at random…
The Message of Zechariah: Your Kingdom Come (Paperback)
by:
Barry Webb