The Temple Mount was not in our official itinerary, but we fitted it in by leaving early enough to fit in an extra site. The Mount is only open to non-Muslims at certain times, so you have the first half of the morning and an hour over lunchtime to choose from. We decided against queuing in the heat, and as it happened beat the queues entirely.

The Temple Mount has many gates, but non-Muslims can only enter through this one gate, reached via a covered walkway, with a security checkpoint. (Exduse thumb over the lens; I like the picture, so I'll use it anyway!!) Dress very modestly, take no religious literature, jewellery or other items, and have your passport to hand as you may be asked.

Once you enter thorugh the gate, you find yourself in an expansive courtyard area, a far quieter place than the bustle of the old city. In Jesus' day, these would have been the temple courts where he taught. At one end, would have been a double layered colonnade, "Solomon's Colonnade" forming the lower deck, and the offices of the Sanhedrin upstairs. This is where the early Christians met in the book of Acts.

Little remains of the Jewish or Christian period here. The message is that Islam has now replaced all that the temple stood for in former days, so the past history is not relevant. You will find the bases of the columns from the Colonnades of the second temple (i.e., during the time of Jesus), that have been laid out ornamentally in a different place: 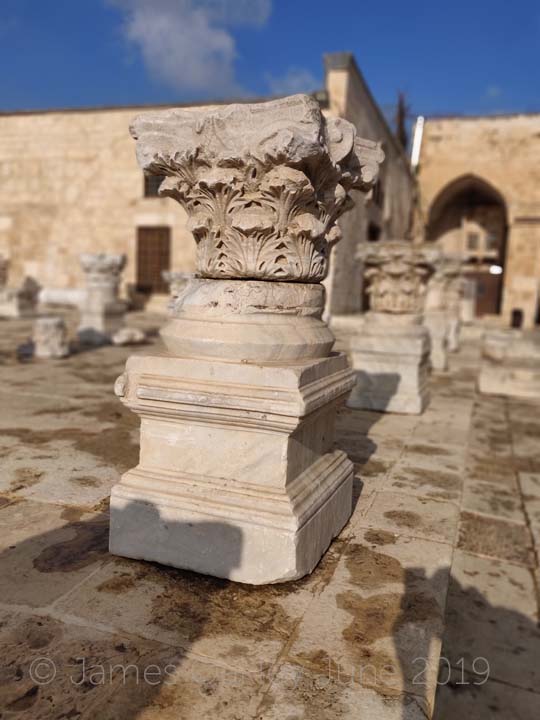 The Temple Mount is dominated by two large mosques. The Dome of the Rock is the large golden-roofed building that dominates the Jerusalem skyline. This is largely used as a shrine today. The functional mosque used for regular worship is the Al-Aqsa mosque, with a black domed roof.

The Dome of the Rock stands almost exactly where Solomon's temple stood. Solomon's was far taller, but you still get an impression of how prominent this rocky hilltop was even before Solomon built upon it.

The rest of the day took us to three main places, but in two of the three I did not take many pictures.

First, we visited the City of David, the oldest part of Jerusalem.

The city of Jebus was heavily fortified by the Jebusites, and was not successfully captured during the initial conquest under Joshua. David finally conquered it, having said that anyone who does so would have to proceed through the "water shaft" (2 Samuel 5:8).

The hilltop city needed a water supply, which came from the Gihon spring in the Kidron Valley. The Jebusites had extended the city's fortifications out to an area above the spring, so they could get access to the water. None of those additional fortifications survive. An archaeologist named Warren found a tunnel down towards the spring, and assumed this to be the famous "water shaft". In fact, it seems it was not, so the "water shaft" may instead have referred to the "water works" - their fortifications were weakened where they had extended them beyond the natural hilltop. We may never know.

We do know that Hezekiah built a huge plumbing project to bring the water of Gihon inside the city walls. A 500m long tunnel survives to this day, bringing water at a gradient of no more than 1% from the Gihon spring to the pool of Siloam (now dry) inside the ancient city wall. We walked the tunnel, mostly calf-deep, occasionally thigh deep. I left my camera with those not walking through the tunnel, which is why this part of the trip had no pictures.

As you climb back from Siloam to the entrance to the City of David Archaeological Park, you get a good view of the ruins of the palace of Helena of Adiabene, still being excavated.

The second scheduled site of the day was the Davidson Centre, which gives us access to the southern and western flanks of the temple site. This yields a number of treasures.

You get to see the huge size of the stones used by Herod when he expanded the temple site. These stones were the ones that impressed the disciples in Mark 13:1

You can see the Gate Beatiful where Peter and John went to pray in Acts 3.

You can see the remains of the arch that used to stick out of the western wall of the temple at the south-western corner, forming a gateway to the outer courts where worshippers would have bought sacrificial animals.

They would also have washed themselves in ritual bathes, going down one side and coming up the other cleansed.

One last photo. Jesus said: "Not one stone will be left on another; every one will be thrown down" (Mark 13:2). You can see the huge pieces of rubble formed as the Romans did just that in AD 70:

The third site for the day came after lunch. Again, not on the official itinerary, but an extra for those who wanted it. We visited the site of the "Palatial Mansion" at the Wohl Archaeological Museum

This is a huge house that was found underneath an existing modern house in Jerusalem, dating to the time of Jesus. Who lived there? We can't be sure. We know from the size of the house, and the elaborate stone tiled mosaics on the walls, that this was someone very wealthy. (At one point, they "changed their wallpaper" - an older mosaic was found underneath the first one they uncovered. To mosaic-tile your house once was extravagant; to redo it when you get a new suite is doubly so.)

We know they were a priestly family, because stone water jars were found there (compare John 2:6). Stone did not take on ritual impurity in the way that pottery would, so was used by priests for ritual purposes; the expense of producing jars out of stone was such that you would not make your jars this way unless you had to. (Here are some stone jars from the Israel musuem, not photographed at this house):

If so, it's poignant to stand in the courtyard (more an atrium - it was open to the air, but inside the house rather than a public area), and look through what remains of the window into the public reception room. If so, you have the view Peter had watching Jesus being questioned, when he denied ever knowing him.

Once again, no photographs, because this particular museum had a strict policy of "no photography" to preserve these ancient remains that were so accessible we could touch them.

END_OF_DOCUMENT_TOKEN_TO_BE_REPLACED

One book, at random…
Jonah, Micah, Nahum, Habakkuk and Zephaniah (Focus on the Bible) (Paperback)
by:
John L. Mackay