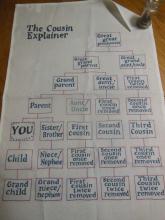 The past couple of weeks, this image has been circulating on Facebook, entitled the Cousin Explainer. 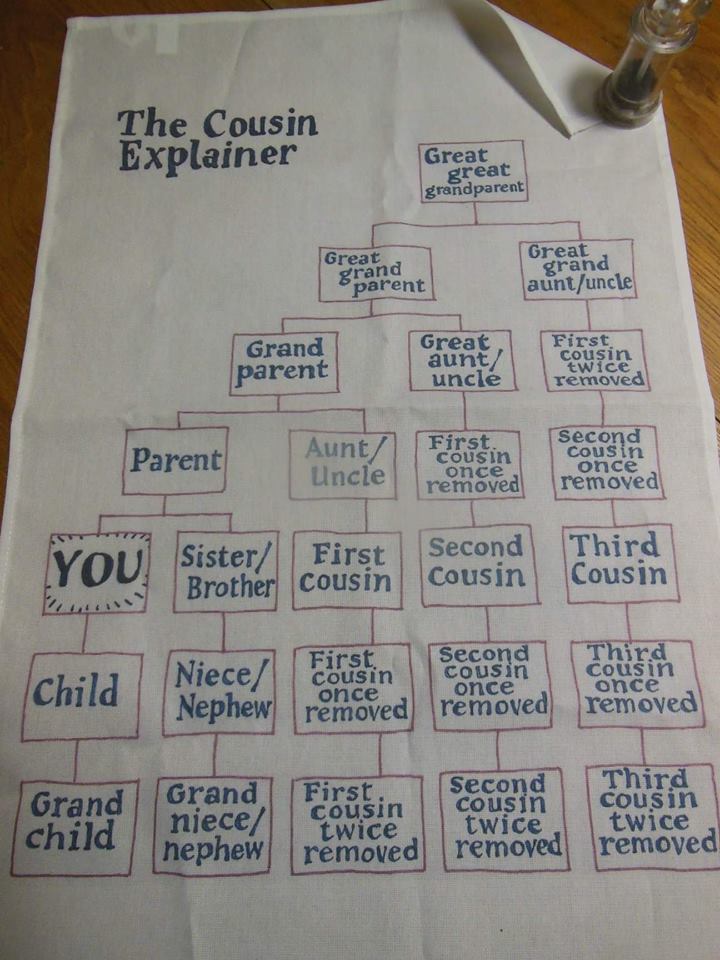 As a mathematician, it always bothered me that I could not explain, or even better 'define', what an mth cousin n-times removed is. Well, now I can. And I share it here so that you can too.

Is "First Cousin Once Removed" ambiguous?

As various friends of mine have shared this image, there is one question that seems to come up repeatedly:

"I wasn't aware that there were two ways to be first cousin once removed."

The answer is: There is, and there isn't, two ways to do this.

I'll come to a more general definition in a moment. But, for now, note that the individual on the diagram ("you"), has two first cousins once removed.

That only creates ambiguity you don't get with simple "cousins" because your first cousin once removed will be one generation above or below you.

Now we've got that out of the way, let's define this precisely.

Suppose two people, X and Y are Mth cousins N times removed. What does this mean?

Assume, for now, that M and N are both strictly greater than 0.

Assume, without loss of generality, that X is either the same generation as Y, or is in an older generation.

If N = 0, and M > 0: X and Y are simply what we know as Mth cousins. You don't say they're, for example, "2nd cousins no times removed", you just say "2nd cousins". The definition above tells us what this means: It means that if you each go up the family tree by M generations, you hit two people who are siblings. So, 2nd cousins have grandparents who are brother or sister, 3rd cousins have great-grandparents who are brother or sister, and so on.

If M = 0 and N > 0. Again, apply the definition, and remember that "zero generations up the family tree" leaves you with the person you started with. Either your "zeroeth cousin N times removed" is directly descended from your brother and sister, coming N generations below them. Or you are N generations directly below their brother or sister. In other words these are (maybe "great") nephews, nieces, uncles and aunts.

Lastly, let's turn this round the other way.

If X = Y = 0, then your relationship is that of brother or sister.

Well, this gets impossibly complicated if you bring relations by marriage into the equation. That's to say, X and Y could be cousins because X is descended from Y's dad's sibling. But Y and Z could be cousins because Z is descended from Y's mum's sibling. In that case, X and Z would not be related at all, at least not because they're both cousins of Y.

So we'd have to assume that this scenario is not in play. Assuming that, what can we say about the relationship between X and Z. There's some fancy group theory that could be done.

END_OF_DOCUMENT_TOKEN_TO_BE_REPLACED

One book, at random…
Biblical Preaching: The Development and Delivery of Expository Messages (Hardcover)
by:
Haddon W. Robinson