Stopping Word capitalising the first letter of 'the'

Here's a problem with Microsoft Word that's bugged me for ages.

Starting a new sentence in Word

Normally, if you start a new sentence, you want the first word to begin with a capital letter. If you forget, Word will helpfully underline the word in squiggly red, to prompt you that your lower-case is a spelling mistake. That's a useful feature of Microsoft Word.

'Robinson's solicitors said everyone has the "right to a fair hearing".'

That's correctly punctuated. It would be incorrect to write:

Robinson's solicitors said everyone has the "Right to a fair hearing".

The word "Right" does not start the sentence.

Microsoft Word usually gets this right. You can open a quoted portion of text, with single or double quotation marks, and Word will not object if the first word does not start with a capital letter.

But not with 'the'

There is one exception, and I don't know why Word treats this differently. That is when the first word you quote is the word 'the …', and you use single-quotation marks. 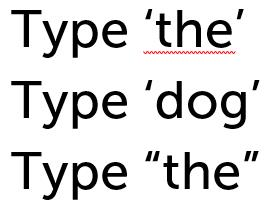 This is extremely annoying. There is nothing about the word 'the', and nothing about single-quotation marks, that makes this wrong, and the other examples correct.

For years, I've been niggled by this. I've right-clicked on "the", and chosen "ignore". More often than not, when I save and re-open the document another day, Word has forgotten my request to ignore the error, and my document says it's not spell-checked correctly.

Solving this is actually really simple. Instead of choosing "ignore" from the pop-up menu, choose "add to dictionary". 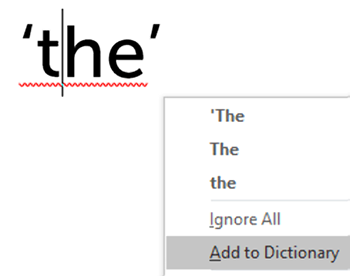 Word then adds “ 'the ” (with an opening quotation mark, but no closing one) to your custom dictionary.

Thereafter, Word will not see this as a spelling mistake.