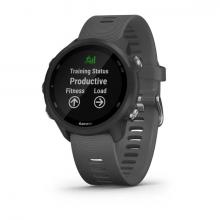 Garmin is about to release the next generation of their running watches: The Forerunner 255 and the Forerunner 955. As I write, these aren't available for another 4-8 weeks. But it seems the Forerunner 245 has been marked down in anticipation. This prompts me to do what I've been meaning to do, and review the 245.

I love to run. I'm not some mad ultra runner, doing 4 marathons a week. But I'll happily go out twice a week, and do somewhere between 3 and 9 miles each time (usually 4-6 miles), at between 9 and 10 minutes a mile. Nothing out of the ordinary, but great fun. An hour's running covers a much bigger distance than an hour's walk, so you get to see so many more places that way.

I used to keep an old, cheap, light mobile phone in my pocket, and run a sports tracking app on it to log my runs. Increasingly, this frustrated me. Sometimes, it could take 5 minutes, or even more, to get a proper GPS fix. And I'd often get back from a run, and see that the track it had recorded had deviated far from the paths and roads I'd taken - either logging a zigzag, or just drifting from the actual route. That meant I couldn't trust the distance it said I'd covered. I had a bluetooth heart-rate monitor, but getting that to pair was also a hassle, and meant yet more time before I could start to run.

I could have solved lots of those problems by taking a high-end phone out running. But I didn't want the bulk and the weight, nor the risk of damaging a more expensive phone. So I took the plunge two years ago, and bought the Garmin Forerunner 245, a specific running watch.

What Does It Do?

Let's start with the basic idea: A sports / running watch contains a GPS chip and a heart-rate monitor. You can press start when you start to run / walk / cycle, and stop when you finish. It will record where you go, and how your speed and heart-rate performed over the course of the workout. You create an account on Garmin's website, and link the watch to that account. When you get back from running, the watch will sync with that account, and your run is preserved for later. You can then share it with friends, sync it to another running service (like Strava), run against yourself on another day (more on that later), keep track of your personal bests on particular routes, and so on.

While you're running, you can press the up and down buttons to cycle through various screens showing the route run, current speed and distance, lap speed and time, and heart-rate to name but a few.

It also uses the data it collects to build a general picture of your health and fitness. You'd need to enter your weight and date of birth for it to get this right, but it can then use the heart rate and route to calculate the calories burnt. It has other sensors to measure the amount of oxygen in your blood, which means it can work out "VO2 Max", an estimate of your lung efficiency. It will tell you how strenuous your workout was in terms of aerobic and anaerobic activity, and estimate how long you should rest before you next run hard. I don't use this feature, because for me running is about getting out and going to whatever place I fancy running to, but it can suggest how long a run would be good for your fitness each day and how hard to push yourself during that time.

Optionally, you can collect more data by pairing the watch with a number of other sensors you can buy separately. You can get bike wheel sensors, sensors that go inside your trainers and chest-fitted heart-rate monitors. Without this, it will monitor your running cadence (strike-rate), but more sensors means more data. Those really wanting to hone their running or cycling may benefit from this. Personally, just the watch does me really well, and is a huge improvement on my old phone.

Two features I use a lot are "courses" and "PacePro strategy".

"Courses" lets you use the Garmin Connect app or website to map out the route you wish to take. You can then push that route to the watch, and run that particular route. The on-screen display can then show you the shape of the entire route you're running. Once you press "start", it changes to show just the next quarter mile or so, shading in blue the route behind you that you've already covered. That helps you anticipate when your route turns left or right and how sharply, that almost always means you can pick the right path at a junction without having to stop and check. Should you stray from your route, it will tell you that you're "off route", and how many feet away you are, which means you get alerted pretty quickly if you miss a turning. This is much easier than carrying a map and having to stop to consult it.

It gets better. It will also give you turn by turn directions. At the bottom of the screen it will tell you whether you'll next be turning left or right, and it counts down the distance before that turn. When you get near the turn, it beeps to let you know that you're just 100 feet or so away. This is also great on a bike. Even if you're not using your bike as an exercise tool, but just cycling to a friend's house, the watch can effectively act as a wrist-mounted satnav. Like an actual satnav, it sometimes misjudges where the path you're on goes, and directs you to turn left when it's just the path turning a corner, or doesn't direct to you to take a turning because it doesn't realise that the path you were on goes a different way. So you need the on-screen map as well as the turn-by-turn directions, but any car satnav user will be used to this.

The on-screen display is simple. It doesn't show a full map with other landmarks like a full satnav device would; it's no substitute for Google Maps. But I find it is enough to lead me through an unfamiliar route without getting lost and without having to keep stopping.

PacePro then lets you tell the website or app how fast you want to run a particular route. You can ask it to pace you evenly throughout the route, or you can adjust a slider to make you run faster at the beginning, or to save energy at the beginning by running slower heading into a faster finish. You can also choose how much you want to run slower up hills. Some runners like to run everything at an even pace, treating uphill sections as a challenge to motor up; others know they'll be slower on the uphills and want a faster target for downhill or level sections to compensate. Again, there's a slider to adjust that.

I have two wish lists for Garmin on PacePro.

1. You can choose to adjust your speed every kilometre, every mile, or whenever the gradient changes significantly. I'd love a feature to enter your own breakpoints.

2. The "take uphill sections slower" doesn't go slow enough for me. I'm just not fit enough, and it will never give you slower than about 14 minutes per mile. If the hill is particularly steep or long, I can't maintain that pace, so wish the slider would go further to the left than it does. Apart from those two asks, it's a great feature.

More Advanced Feature: Race Against Yourself

One feature I'd use more if it was more reliable is to "race against a previous activity". The idea is that you pick a previous run, and make it your competitor. The watch shows you how many seconds ahead or behind you are, showing graphics depicting two runners on the display (one for you, and one for your ghost runner), and you can see yourself pulling even and overtaking your alter ego. If you want to try and run a familiar route a little faster than last time, it's a great feature.

Mostly, it works. Since an update a while back, sometimes, it goes a little crazy. The two runners on screen still work accurately, but from the moment you start it decides you're something like 46 minutes ahead of yourself (which you clearly aren't). If you drop behind being 46 minutes ahead (say being 45 minutes, 58 second ahead), it says "45 minutes, 58 seconds behind". What it actually means is "2 seconds behind", since 46 minutes ahead is actually even. I've no idea why this bug occurs, and why they haven't fixed it. That's a minor gripe for an otherwise great watch.

There are different colours, but there are two basic editions of the watch. There's the basic Garmin Forerunner 245, and the 245 Music. The "Music" one has more storage, and has built-in Wi-fi. You can upload your music tracks to the watch, and connect Bluetooth earphones. The watch then functions as your music as well.

Personally, I didn't bother. If I want music, I take that cheap old phone out again; it's good enough for that. But if you wanted all-in-one, and didn't mind paying a bit extra to get that, then get the Music edition. The vanilla Forerunner 245 is good enough for most.

The specs for the forthcoming Forerunner 255 are not much different than the 245. The forthcoming 955 is a replacement for the 945, and is in a different league altogether. The 955 comes with solar charging, which may be worth waiting for if you're looking for the top-end. (The 955 Solar is £549.99).

On Amazon, you can currently pick up the 245 for £179, or the 245 Music for £237.89. Personally, my thought is that those are great value, and it will be some time before the more recent 255 range come down to anywhere near those levels, so worth buying a 245 while they're still in stock. It is a great watch

If you've used either, or have other recommendations, do post in the comments below!

END_OF_DOCUMENT_TOKEN_TO_BE_REPLACED

One book, at random…
The Message of Revelation: I Saw Heaven Opened: With Study Guide (The Bible Speaks Today) (Paperback)
by:
Michael Wilcock