Peter walking on the water: An example 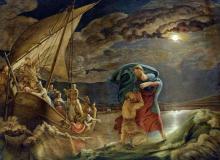 Last week, I wrote a post quoting Calvin's interpretation of Peter walking on the water in Matthew 14:22-33. I was looking again at this passage, as the lectionary brought it round again, having last preached on it in 2018. The reader of Matthew's gospel has to decide whether Peter is an example of faith, to be copied in some way, or a reckless man who puts himself needlessly in danger. I also enjoyed engaging with Ian Paul, who also wrote up the contours of the debate.

In 2018, I opted for the view that Peter is reckless. This time around, I've slightly changed my mind. I've "changed my mind", because I now think his wish to walk on the sea, and his variously successful ability to do so, are an expression of his faith in Jesus at that point. My mind change is "slightly" because I still don't think his action is being commended to us. It illustrates his faith; James would say his faith was made complete by what he did. We need his action to see his faith, but he did not need to do this in order to trust Jesus commendably. What is commended to us is his faith, not his risk-taking action.

Let me explain how I get here:

I think I missed three important details in 2018.

All of that points to the fact that the disciples, including Peter, do believe Jesus to be the Son of God. What’s missing, which won’t come until 16:16, is Peter’s proclamation that Jesus is both Messiah and Son of God. When Jesus describes Peter as having “little faith”, he refers to his faltering whilst on the water, not to his questioning of Jesus in the first place.

One longstanding mystery for me has been why this story is here at all. In chapters 8-9, Matthew records precisely the miracles he needs to establish in Matthew 11:5 that Jesus is the Messiah foretold by Isaiah. We get more miracles in chapter 15, to makes points about the inclusion of the Gentiles, but why does Matthew need to record the two miracles he does in chapter 14?

The conclusion would seem to be that Matthew includes this to record the disciples’ progress towards seeing who Jesus is. This is a milestone moment for them.

When we see Peter walking on the water against this backdrop of the story as a whole, we are being shown his faith. He and the others have finally grasped, very partially, who Jesus is. So all Peter needs is the assurance that this really is Jesus and then he’ll step on the water too, because the Jesus he’s recognising could make that possible.

This still doesn’t mean, necessarily, that he was right to want to climb out of the boat and that we are being invited to copy him. We do note, against Calvin, that the reason Peter “quickly suffered” was not for “his rashness” but because “he saw the wind” (Matthew 14:30).

In conclusion, the story as a whole is showing us the disciples piecing together who Jesus is. They reach a partial correct conclusion here, which becomes more complete in chapter 16. They’re initially surprised to see Jesus (he hasn’t done this before, so they assume he’ll catch up with them later – this was the last thing they were expecting), but when they see it is him they’re pleased to take him into the boat at which point he performs a second miracle and stills the wind.

Peter is not an example that we should put ourselves in harms way, trusting Jesus will protect us. But he is a challenge as to whether we have sufficient confidence in Jesus’ power that we are actually willing to trust him with our lives. The contemporary message of the passage becomes “If he really is the person you say you believe him to be, then he’s able to look after you totally: Do you believe this to be so to the point that you’re actually willing to entrust yourself to him?”

END_OF_DOCUMENT_TOKEN_TO_BE_REPLACED

One book, at random…
I married you (Paperback)
by:
Walter Trobisch