Day 6 was travelling day, checking out of our hotel in Jerusalem to head towards Galilee.

The route we took was to descend down into the Rift Valley to the top of the Dead Sea. On the way, we stopped at a place to appreciate how vast and how beautiful the Judean desert is.

You can also look down to where there is a pass between the hills. That is where Jericho lies. From this viewpoint, you can see the small belt of green that shows you the path formed by the Wadi Qelt, the deepest valley through this vast wilderness. The wadi (like all wadis) is dry most of the year apat from when there is rain on the hills, when it gushes with torrents of water. (Apparently, more people die of drowning in these deserts each year than of thirst, unaware there has been rain higher up that will shortly produce flash floods). There are a number of year-round springs in the Wadi Qelt, however.

We didn't take this path, but drove down the main highway from Jerusalem into the Rift Valley. At the bottom, we had turned right towards Masada earlier in the week. This time, we turned left (north) soon to reach Jericho.

Modern Jericho is a thriving modern city. It even has a Pizza Hut!

The ancient city is very old. It claims to be the oldest city in the world, with evidence of human habitation as long ago as 8000 BC. The old city has been destroyed and rebuilt several times, like many ancient cities, and the site is Tel es-Sultan, just outside modern Jericho.

At the bottom of this picture you can see some stones found on the site. The display sign dates it to Middle Bronze (1950 - 1650 BC).

That would be before the conquest of Canaan (which I believe to be about 1450). That leads some archaeologists to say that there was no walled city here at the time of Joshua. Arguing from absence is always risky: Just because there was a city here in 1800 BC does not rule out there being one about 1450 BC, even if you have found no evidence from that date. There's also the complexity that the city, at some points, would have had two concentric walls, giving an outer and inner defence. But the dating of these stones is itself controversial, and people are still studying, researching and publishing on this.

What you can clearly see is different kinds of stone wall in layers, with older walls underneath more recent ones.

Then you can climb to the top of the tel, and imagine the Israelite army marching for 7 days around the city that once stood here.

Jericho is a key location. There are several fresh water springs here, giving an abundance of fresh water. It's also 258m below sea level, making it the lowest city in the world as well as the oldest. That means it's very hot. Date palms in particular need both lots of heat and lots of water. Today, many grow both wild and in plantation all around Jericho, and in Bible times it was known as the City of Palms. It's also key strategically, standing at the entrance to the pass through the hills that reaches up from the Rift Valley to Jerusalem.

From Jericho, we followed the road up the Jordan valley, out of the West Bank, and up to Galilee.

On the way, we paused to swim at Sachne, a place where there are several natural fresh-water lakes. The waters and eh springs are warm, and make for pleasant outdoor swimming at any time of year, with lifeguards on duty. 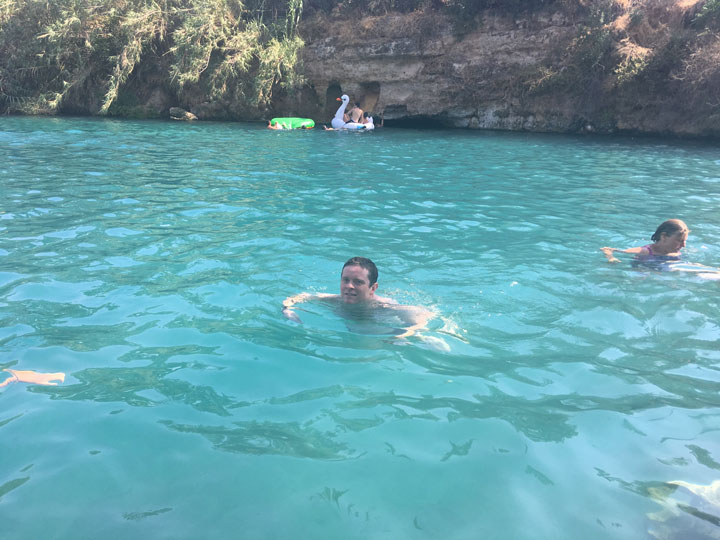 You could not have a bigger contrast to the dry, hot, dusty deserts we had been through.

END_OF_DOCUMENT_TOKEN_TO_BE_REPLACED

One book, at random…
The Light Has Come: An Exposition of the Fourth Gospel (Paperback)
by:
Lesslie Newbigin