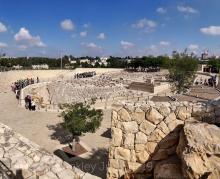 Day 5, in the morning, we headed to west Jerusalem, the modern city, to three related attractions just across from the Knesset building (the Israeli parliament).

Model of Jerusalem in the time of Jesus

First up was an amazingly impressive 1:50 scale model of Jerusalem at the time of Jesus. You can walk all around the outside of the model, viewing it from every possible angle. Having visited so many parts of ancient Jerusalem, I was beginning to build a mental picture of how the whole ancient city was laid out, and how it expanded first as David conquered it from the Jebusites, then as Solomon built the temple on the threshing flaw of Araunah, and then as Hezekiah fortified the enlarged city as refugees from Northern Israel settled west of the Tyropoean valley.

This view is from the south-east. The temple is obvious at the right. To the left of the temple is a very densely packed area of buildings, straddling the Tyropoean valley. But above that (in the picture) is an area where the houses are much larger. Wealthier people would have lived there, and this is the area where the Burnt House and Palatial Mansion (priestly houses) are located, the modern city's Jewish quarter.

Below is an excellent view of the City of David, the oldest part of the city, with its own defensive walls. The picture is taken from the south, looking north. The City of David heads from the temple mount, in a narrow spur along the ridge between the Tyropoean and Kidron valleys. It's a little hard to see in this photo, but you can just make out the pool of Siloam, to the left of the southern most tip of the City of David area. The Gihon Spring itself would be in the Kidron, to the right (east) of the walled city, roughly midway down from the temple to Siloam. Nothing remained of the earlier Jebusite fortifications of that spring by the time of Jesus.

Here (below) you can see how expansive the temple courts were. At the left of our photo (at the south of the temple court area) is a double-storey colonnade. At ground level, this is Solomon's Colonnade; on the first floor were the offices of the Sanhedrin.

One last picture: Here you can see how the temple itself was at the centre of the temple courts. You also get a good view of the concentric design of the temple area. The large outer courts were the Court of the Gentiles, where anyone could go. Clearly visible in the model (but not in this photo) were a series of bollards forming a balustrade barrier; inside this barrier was the Court of the Women, where any Jew could go, but not Gentiles. At the centre of this area is a walled off area, flanked by towers, the Court of the Jews, where male Jewish worshippers could go to offer their sacrifices. That area was itself divided in two: The eastern half (nearest us in the photo) was where the any purified Jew could go; the western half was divided off as a separate area only for the priests. Lastly, the temple building itself, of imposing height, was only for the High Priest to enter, and that only once a year.

Second, was a visit to the Shrine of the Book, that sits beneath this sculpture that resembles a giant tagine.

In fact, it's designed to resemble the lids that covered the clay pots containing the Dead Sea Scrolls; it's white because the Essenes made much of the distinction of light and darkness; it's bathed in water, because ceremonial washing was important to the Essene community. Just across, was a large black wall symbolising darkness. I could take no photos inside - there is a strict policy disallowing it.

Go under this structure, and inside, you can read all about the Essenes themselves, much of which we'd already considered by visiting Qumran. But the centrepiece is sections of the Scrolls themselves on display, including the Great Isaiah Scroll which contains a full copy of the whole of Isaiah. The original scroll itself used to be on display, mounted in a massive metal casing that be lowered and locked into the ground if there's any security risk; now they've replaced even that with a facsimile (but kept the bomb-proof display cabinet).

This was absolutely mind-blowing to see. A full copy of Isaiah from before the time of Jesus. My Hebrew is exceedingly rusty, and the text is not pointed (no vowels), making it even harder to read. But it was fun to work out where the beginning is, and to realise that I could start to make things out in this ancient text. There it was: "The vision of Isaiah son of Amos, which he saw concerning Judah and Jerusalem..." (and then I got lost!)

It was interesting to notice this (photo credit Jb344tul):

There are two words with dots underneath each letter, and different letters written above. Look closely, you can see that the letters written above are those on the main line of the text for the other word. It would seem this is a very early example of what later became "Qere" and "Ketiv". The idea was that the consontal text of the Hebrew Bible was sacred and should not be altered. Marks above and below the letters told you how to pronounce the words (e.g., what we would call vowels), but occasionally there was a belief that a copying error had led to the wrong word being written. In this case, the consonantal text cannot be altered, but you can make a marginal note saying what you believe should have been written. You end up with one set of consonants that are what is written (the "Ketiv"), and then a different set in the margin that you are to read (the "Qere").

Downstairs, and actually just as exciting, is an exhibit detailing and giving extracts from the Aleppo Codex. In the 7th to 9th centuries, some Jewish scholars called the "Masoretes" were concerned that the traditions as to how the Hebrew scriptures were to be read and chanted may get lost. So they devised a series of notations to record this, the marks above and below the letters I just referred to. These give vowels, emphases, and directions for cantillation (chanting). The Aleppo Codex is a manuscript containing many (not all) books of the Hebrew Bible, dated to the 10th century AD, found in the Galilee area of northern modern Israel. It is one of the earliest expansive examples we have of a record of this system of notation. The museum contains explanations of the Codex and its discovery, and both facsimile and original portions of it.

The archaeological exhibits in the Israel Museum are many, across many rooms. Fortunately, travelling with Oak Hall, you get a guide to show you (and explain) some that are particularly significant for illuminating the Bible. Here are a few tasters:

Ever wondered what the "horns" of an altar are? Wonder no more. Here's an ancient stone altar.

Three more details to note about this particular altar. 1. It was made of dressed stone, something God expressly forbade. 2. This altar was destroyed about the time of Hezekiah, who was recorded in the Bible as cleansing the land of altars throughout the land so that people only worshipped at the place God had set his name (as he had commanded). 3. Note the snake etched into the stone at the right hand side of the picture, an ancient fertility symbol.

Next up: Most people think of "idols" as large structures, 3 to 9 feet tall, and wonder how Rachel hid hers in her camel's saddle (Genesis 31:34). Pagan temples may have had large statues, but household gods were more like these:

This also illustrates the terrible events recorded in Judges 17 and following.

Below is a stone discovered at the excavations at Hazor.

It celebrates the military victory of Hazael of Aram over Ahaziah "of the house of David" (highlighted in white chalk). Before this, many scholars doubted if the biblical King David ever existed. This stone is significant both because of its age (9th century) and because it was found in the far north, showing that David not only existed but was well known across a wide area.

In Bible times, documents were sealed with clay seals rather than wax ones. If the document is destroyed in a fire, the document itself is lost, but the clay becomes baked and is preserved (these are called "bullae"). Here is one from Hezekiah himself.

Lastly, here's a fragment of a stone sign from the ruins of the Second Temple:

The full sign read: "No foreigner shall enter within the forecourt and the balustrade around the sanctuary. Whoever is caught will have himself to blame for his subsequent death". On the line one up from the bottom, you can just make out , part of the Greek word - in lower case - (death).

END_OF_DOCUMENT_TOKEN_TO_BE_REPLACED

One book, at random…
True to the Faith: Charting the Course Through the Acts of the Apostles (Paperback)
by:
David Gooding