Day 5, after lunch, was two ports of call at or near the now-not-so-little town of Bethlehem.

First up was the Herodion, a hill-top retreat built by Herod the Great. If Masada was his desert fortress, this was his country retreat. There is a lower Herodion, remains of which can be seen, showing the expansive area at the foot of the hill fort where he could entertain large number of guests.

Then there's the fortified hilltop, the Upper Herodion. Here's how it would have looked:

And you can clearly see all this very clearly from the ruins: 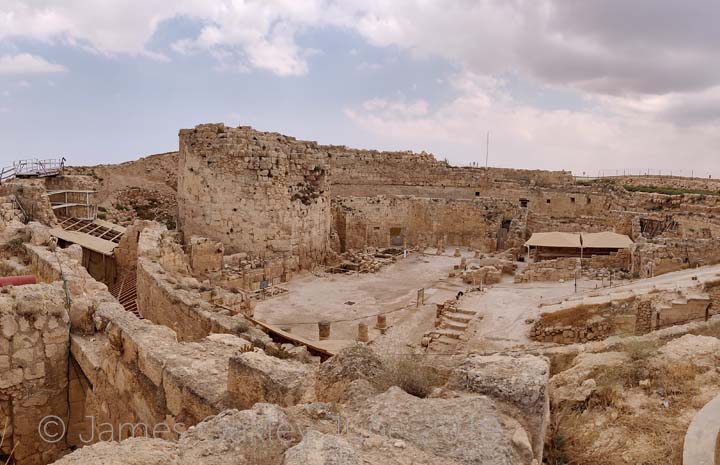 Like Masada, the Herodion also has history after the time of Herod. It was captured in about the year 66 AD by Jews revolting against Rome. Herod's former reception hall was expanded and turned into a synagogue, with benches added around the edge:

As with all hill forts, water was at the bottom, but the fortifications needed to be around the top. So, another cistern:

That would have held a lot of water. It's a good job you can't visit too many cisterns.

Part of the appeal of visiting the Herodion is that it's just 3 and a half miles from the oldest part of Bethlehem, in the same direction (south-east of the town) as Beith Sahur (the traditional site of the "shepherds' fields"). We don't actually know where the shepherds were in Luke 2. As with Gethsemane and the Sepulchre / Garden Tomb, there's something awe-inspiring in finding a place that helps you to visualise what the Bible events might have looked like, whether or not it's the exact spot (which may have changed considerably since the time of Jesus).

So it is that the Herodion is in the hills just outside Bethlehem, and makes a good place to stop and picture the shepherds who were visited first by a single angel and then by a whole choir and army of them.

Bethlehem and Church of the Nativity

Then it was time to head into town and visit the Church of the Nativity, the exact spot where Jesus was thought to have been born.

The church itself is ornate. It is in fact three churches - the church over the crypt where Jesus was born is Greek Orthodox; with two smaller church buildings for the Armenians and the Roman Catholics adjacent.

If you want to go and see the exact spot, you need to queue for anything up to an hour.

Beneath the Roman Catholic church are remains of what are said to be Joseph's original home (and may indeed be that). In these remains are a small room which is said to be (and almost certainly is) the room in which Jerome studiously laboured to translate the Bible into Latin, so producing the Vulgate.

As you leave Bethlehem, you drive through the checkpoint in the wall that surrounds the town. Palestinian people can only leave with permission, and would usually be issued a permit telling them how long they have before they must return. As a result, ancestral lands may be inaccessible, and crops may be beyond reach to harvest and sell.

It's impossible not to feel sad to see the partition, and the effects it has on many. At the same time, this is a complex situation. The wall is around certain areas under full Palestinian control (known as "Area A"), where the Israelis have felt the need to partition off the Area more defensively. This situation has evolved now over several decades, with both groupings making moves towards peace at times, and with some from both groups also acting in ways that breaks down trust and goodwill. As Westerners, coming in from outside, I feel we should observe and pray, but also admit that we do not fully understand the fragile balance there is here. To come in and take sides, pronouncing solutions, is only to make the problem even more complicated. Instead, it's good to build friendships with Jews and Arabs alike, to listen to their stories, get to know them and their families, and seek to support them in practical ways. It was a privilege to get to know many who live here over the 10 days we visited.

END_OF_DOCUMENT_TOKEN_TO_BE_REPLACED

One book, at random…
The Message of Amos: The Day of the Lion (The Bible Speaks Today) (Paperback)
by:
J.A. Motyer