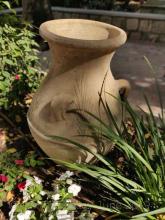 The second half of day 2. Climbed up from the Kidron Valley to enter the old city at the Lion Gate, also known as St Stephen's Gate, which is somewhere near the ancient site of the Sheep Gate.

Just inside, on the right, is the excavated Pool of Bethesda. John describes this, in John 5, as having "5 covered colonnades". For many years, historians assumed John was wrong, because pentagonal structures were unknown from this period. What was eventually excavated was a pool that would have filled with dammed rainwater, probably the "Upper Pool" referred to in Isaiah. Much later (about 2000 BC), a second pool was added next to it, which would have more than doubled the amount of water that could be stored.

Crucially, pillars of colonnades were found around the pool structure, with another (fifth) colonnade along the line dividing the two pools. (You can see one of those pillars in the centre of the picture above, where the "upper pool" is on the right, and the later pool is on the left and indeed would have extended further left beyond the terrace you see with steps.) The 5 colonnades were formed by the pool being a squared-off figure of eight. Here's a photo from the model of Bethsaida from the model we saw later on in the trip. (Since this model was made, further archaeological work suggests the pool was not on two levels as shown.)

Next to Bethesda is St Anne's church, which has wonderful acoustics - we took the chance to sing Amazing Grace together.

From there, we headed to "the pavement", "Gabbatha", also known by its Greek name as the Lithostratos (stone pavement). It's the traditional site for Jesus' trial before Pilate; the crowds were outside on the street, while Jesus and Pilate were inside in the courtyard area.

Jerusalem, like most ancient cities, has been rebuilt a number of times following conquests, with later cities built on top of the ruins of earlier ones. Here, several feet below present-day street level, is a section of paved street stone built in the time of Hadrian, and so dating to the second temple period. The striation marks are clearly visible. If the location for Gabbatha is correct, these are the very stones where the crowds stood as Pilate went out to say to them: "Behold, the man!"

Church of the Holy Sepulchre

From here, after a stop for lunch, up to the Church of the Holy Sepulchre. This is the site with the most longstanding tradition to be the place of the crucifixion and burial of Jesus. Now, it's a huge church building, with several different Christian groups sharing the use of it (including an Eithiopian monastery currently on the roof!). The spot where Jesus' grave is said to be is enclosed in a huge mausoleum, with 30-60 minute queues if you want 30 seconds inside.

Far more interesting is something off the beaten track. In those days, bodies were placed in a tomb for 12-18 months to decay. The bones were then gathered up and reburied in a box called an ossuary, and the tomb itself could be reused. Tradition has it that Joseph of Arimethia did not use his tomb again after Jesus was laid in it. If Jesus' tomb is now inside this church, then where did Joseph himself get laid after he died? Here you go:

As with Gethsemane, you have a choice of where to go to remember the death, burial and resurrection of Jesus. The Holy Sepulchre has the most ancient tradition to be the site. The Garden Tomb gives you another place you can go, that still looks like Jesus' tomb may well have looked.

Furthermore, as the staff there explained to us, it may actually be the site. The evidence is compelling, even if you still decide in favour of the Holy Sepulchre. Here are some of the pieces of the puzzle. Next to the site is a hill looking like a skull.

The site is beside a road (so that "those who passed by" could mock him) as he hung, just outside the ancient city wall. The site of the tomb is in a garden, and a tomb has been found cut out of rock. The tomb has a grove cut in front of it to enable a rolling stone to be used to seal the grave.

When you enter an ancient rock-cut tomb, you first enter a chamber where mourners would gather; the dead would be placed in a second chamber to the side. With this tomb, you can see into the second chamber from the outer entrance, and (unusually) this tomb has the burial chamber on the right rather than the left. Given this was a garden rather than a cemetry, it was not a place where "the dead" were found, yet the angels told the women not to seek the living among the dead. In the same hillside as the tomb are a network of catacombs, used as burial chambers, with the nearest missing the garden tomb by a matter of feet.

The Garden Tomb is a beautiful and peaceful place to come and give thanks to the Lord for his death, and to rejoice that he is risen. It is staffed by Christians, mostly volunteers, who love to welcome people and show them around.

Whichever site you believe to be original, the important thing is that Jesus is not there. He is risen. 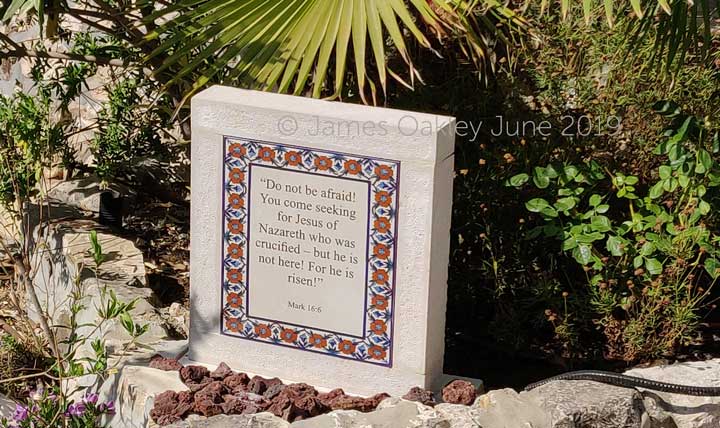