I read blogs, as well as write one. The 'blogroll' on this site reproduces some posts from some of the people I enjoy reading. There are currently 2 posts from the blog 'Lustig's Letter.'

Sun, 29/03/2020 - 15:05
Speaking during a news conference on 12 August, 1986, the US president Ronald Reagan famously said: ‘The nine most terrifying words in the English language are: I'm from the Government, and I'm here to help.’ (Source: reaganfoundation.org)
Not any more, they’re not. Delete and replace: ‘I’m from the Government, and there’s no help available.’ O tempora, o mores. Small government good, big government bad? Heavens above, where on earth did that idea come from? Hey, we’re all Big Spenders now.
And quite right, too.
Oh, and while we’re demolishing hoary old nostrums, remember Theresa May telling an underpaid nurse ‘There’s no magic money tree’? Well, yes, there is, actually, and there always was. It’s just that until the coronavirus appeared, governments preferred to use it to bail out the banks and pay for nonsenses such as the woefully-misnamed independent nuclear deterrent. (Four nuclear-armed submarines, each capable of carrying 40 nuclear warheads. Cost: £5 billion per year.)
As Matthew Parris correctly asked in The Times: ‘Doesn’t the apparent discovery of a magic money tree kick the props from beneath the most potent and persuasive of all Conservative beliefs: that there is no magic money tree? … The Tories had better brace themselves for serious questions about how we can [find the cash] for a virus but not to save a shipyard, or the planet from climate change. Or double the future capacity of our hospitals, or prison modernisation plans, or legal aid limits, or nurses’ and carers’ wages.’
Precisely so. Parris, with whom I rarely disagree, is a life-long Conservative from the humane, thinking wing of his party, but for him, watching Rishi Sunak turn on the Treasury taps at full throttle is akin to a devoted Catholic watching in horror as the Pope announces he intends to get married.
Government spending is about political choices, not magic money trees. Ministers spend tax-payers’ money on what they think is important, and what they think is important depends on their political philosophy. By their spending choices shall ye know them.
Exhibit A, courtesy of Harry Davies in The Guardian: ‘Documents show that officials working under former health secretary Jeremy Hunt told medical advisers three years ago to “reconsider” a formal recommendation that eye protection should be provided to all healthcare professionals who have close contact with pandemic influenza patients.
‘The expert advice was watered down after an “economic assessment” found a medical recommendation about providing visors or safety glasses to all hospital, ambulance and social care staff who have close contact with pandemic influenza patients would “substantially increase” the costs of stockpiling.’
Exhibit B, courtesy of David Aaronovitch in The Times: ‘Four years ago, the independent Commission on a Global Health Risk Framework for the Future issued a report on how something like a flu epidemic could kill millions, cost trillions and derail the global economy. It recommended an annual expenditure in the US of $4.5 billion on prevention, detection and preparedness for such an event.
‘Last September the Global Preparedness Monitoring Board published an expert report warning that “the threat of a pandemic spreading around the globe is a real one – a quick-moving pathogen has the potential to kill tens of millions of people, disrupt economies, and destabilise national security.” Its chairwoman Gro Harlem Brundtland characterised world leaders’ approach as being a “cycle of panic and neglect.”
Ministers chose to ignore the warnings. Just as local councillors chose to ignore the warnings about dangerous materials being used in cladding for tower blocks. And the warnings about flood risks unless money was spent on flood protection. And the warnings about climate change. I could go on.
Who woulda thunk it? Experts know their stuff. When they publish carefully-researched reports warning of trouble ahead, they deserve to be taken seriously. ‘Project Fear’ isn’t always politically-motivated. Sometimes it’s people who know what they are talking about trying to make cloth-eared politicians understand the foolishness of their ways.
As I fear the US is about to discover. The world’s most powerful economy, the engine room of technological innovation, the home of cutting-edge medical research, is about to be laid low by a virus that it has had months to prepare for. No one will ever again be able to argue that it doesn’t matter who sits in the Oval Office.
Here’s what his coronavirus task force coordinator said on the Christian Broadcasting Network about the current occupant:  ‘He’s been so attentive to the scientific literature, the details and the data – and his ability to analyse and integrate data that comes out of his long line of history in business has been a real benefit in these discussions about medical issues.’
You want evidence of that? Verbatim quote from the man himself: ‘You can call it a germ, you can call it flu, you can call it a virus, you know you can call it many different names. I’m not sure anybody even knows what it is.’
Or how about this photo, showing how well the President understands the scientific data? 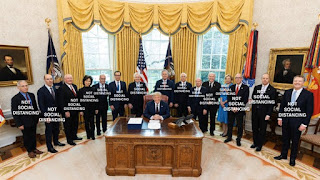 And this attack ad makes the point even more effectively.

I’m usually reluctant to draw conclusions about crises until well after they are over. This one, no doubt, will be the subject of countless inquiries in the years to come. But here are two lessons we can learn right now: planning for worst-case scenarios is never a waste of money; and experts are always worth taking seriously.
Meanwhile, if you need a break from all this stuff, do yourself a favour and de-stress by listening to me read some of my favourite classic children’s stories on my new podcast series Robin Lustig reading stories. You can find them at all the usual podcast places or by clicking here, or here to see me on YouTube.
And when you’re in the mood for some more of my journalism, my five-part documentary series The Future of Free Speech is now being broadcast on the BBC World Service. The first two episodes are available here, and the remaining three will become available every Wednesday until mid-April. As you will discover in the final episode, the free speech debate is directly relevant to the current pandemic.
Categories: Current Affairs

The Future of Free Speech

Mon, 16/03/2020 - 09:42
Since the beginning of the year, I have been hard at work on a series of five documentaries for the BBC World Service. They are called The Compass: The Future of Free Speech, and the first in the series will be broadcast on Wednesday. The programmes will all be available online – click here for the link – and on BBC Sounds.
Each of the programmes focuses on what we are calling different free speech gatekeepers, the people who draw the line between what we are, and are not, allowed to say. The first programme looks at the courts, and then we move on to universities, religions, journalists, and social media platforms.
It’s a fascinating, complex – and highly topical – issue, so I do hope you’ll get a chance to listen.
Meanwhile, here’s an article I have written to introduce the series, and which appears in the current edition of Radio Times:
I have no doubt that the world would be a much more pleasant place if we tried not to be offensive. Twitter and Facebook would certainly be much more pleasant places. But I am also in no doubt that we must defend our right to be offensive – and it is that right which now seems to me to be increasingly at risk.
Freedom only to speak inoffensively is not worth having. So why, after nearly 50 years as a journalist and broadcaster, am I increasingly worried that speaking inoffensively may soon be all that we are allowed to do?
While researching my new series, The Compass: The Future of Free Speech, I met Gerard Biard, editor-in-chief of the French satirical magazine Charlie Hebdo, which was attacked in 2015 by two jihadi gunmen who shot dead 12 people, including several of its best known cartoonists. He now has a round-the-clock bodyguard and operates from an office at an undisclosed address.
Biard says that since the explosion of social media sites, many have come to regard their own feelings as more important than the law. Narcissism rules. Instead of free expression, they demand censorship. Instead of testing ideas, they post selfies. The courts can insist until they are blue in the face that the law upholds the right to offend, but many people, including those jihadis, insist instead on their right not to be offended. (Charlie Hebdo had published cartoons mocking the Muslim prophet Mohammed.)
If you spend as much time on Facebook or Twitter as I do, it is easy to conclude that free speech is a mixed blessing. No wonder, you might think, that the government now proposes to put media regulator Ofcom in charge of making sure that social media sites do more to protect their users from ‘harmful’ content.
Yes, there is plenty of foul stuff online. Yes, it can do real harm. So can the nutty conspiracy theories that swill about in the deeper recesses of the internet. Even so, I think there is real cause for concern if a State regulator is to be given the power to decree what is ‘harmful’ and what is not.
Back in 1968, an anti-Vietnam war protester walked into the Los Angeles county courthouse wearing a jacket emblazoned with the slogan ‘F*ck the Draft.’ He was arrested, but the case ended up in the US Supreme Court, which ruled that his arrest had contravened his First Amendment right to free speech. In the words of Justice John Marshall Harlan II, if the arrest were deemed to be lawful, ‘government might soon seize upon the censorship of particular words as a convenient guise for banning the expression of unpopular views.’ So three cheers for the US Supreme Court.
I accept the need for laws that ban the incitement of hatred or violence. But I am pleased that just last month, Harry Miller won his case against Humberside Police, who had warned him against posting allegedly transphobic comments on Twitter that, although they broke no law, the police chose to classify as ‘hate incidents.’
We need to recognise that one of the prices of living in a democracy is that sometimes we’ll be shocked. We also need to encourage Mark Zuckerberg of Facebook and others to grow up and take responsibility for the monsters they have created.           In Washington, the law professor Stephen Wermiel told me that the previously accepted bargain – you put up with stuff that you don’t like in order to uphold free speech – is a bargain that more and more people are now not prepared to accept. I think that is a very dangerous development. And so would George Orwell, whose warning is inscribed on the wall of the BBC’s London HQ: ‘If liberty means anything at all, it means the right to tell people what they do not want to hear.’

One book, at random…
The Message of Colossians and Philemon: Fullness and Freedom (Bible Speaks Today) (Paperback)
by:
Richard C. Lucas